The truffle, known more often in the two species “white” and “black”, actually has many species of the genus Tuber with very interesting nutritional values. 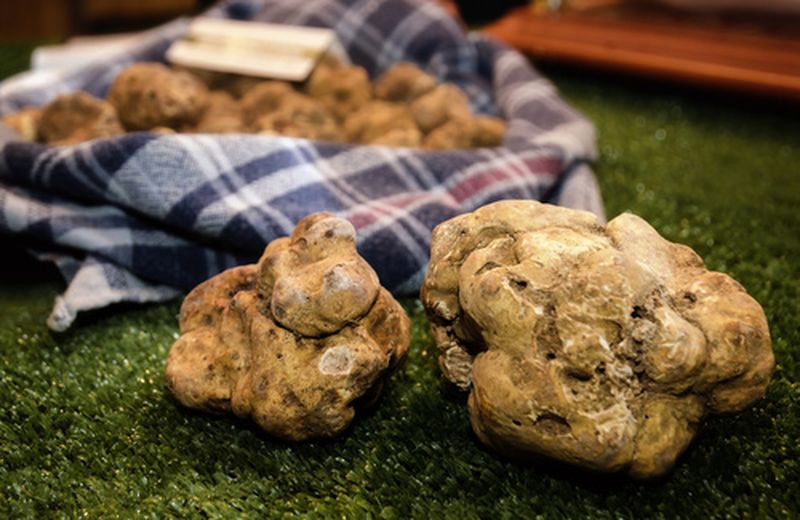 What are the fragrant truffles? They are nothing more than a genus of mushrooms (the Tuber genus) that produce their fruit underground.

The normal mushrooms that we know and buy are in fact only the fruit of the whole organism, which the mycelium (the hypogeal part) ejects to emit spores.

In the case of the truffle, everything takes place underground, in a symbiotic relationship with specific trees (especially oak and holm oak).

Not producing an apogee fruit, the truffle attracts men and animals with its strong and persistent aroma so that it is unearthed and therefore helped to propagate the spores.

As is well known, it can reach exorbitant prices, beyond the reach of ordinary consumers (up to more than 3000 per kg for precious species), it is not by chance that it is called “the diamond of the kitchen”: it is officially considered the most expensive food in the world.

What is beyond the unmistakable aroma and the stellar price? It seems that the truffle, in its various species, helps digestion and is able, with its wide range of aromatic oils, to produce highly antioxidant and elasticising effects on the tissues.

It is an excellent source of magnesium and calcium, with a low fat content and a very high protein content, much higher than that of meat, given its low level of water, and we are talking about noble proteins of excellent quality.

Except for vitamin C with its antioxidant effects, the truffle is poor in vitamins, while its range of minerals is quite extensive. It seems that it is not only rumors or urban legends that attribute aphrodisiac properties to the truffle: it seems that it contains various substances (specifically fatty acids) common to other foods considered aphrodisiacs.

Even if the nickname “natural viagra” is exaggerated and inappropriate, it would seem that the truffle can help increase desire. A little more serious studies have shown that the substances contained in some species of truffles are able to counteract some turmoral forms thanks to their strong antioxidant powers.

They seem to be able to lower the level of cytotoxicity of some carcinogens, prevent iron oxidation and, above all, induce the production of a hormone important in the prevention of brain cancer and breast cancer.

It seems that truffle oil, the real one and not chemically counterfeit, is an excellent remedy in this sense: you can find cheaper versions produced with truffles from the Mediterranean desert areas (especially from Morocco), although the one produced with Italian truffles and French remain the best.

The varieties of truffles

The truffle is a fruiting body of fungi of the genus Tuber and is underground, that is, its entire life cycle takes place underground. There are several species of truffles; in the world, in fact, the mushrooms classified as Tuber are 63. In Italy there are 25 but among these only 9 are considered edible and the most commonly marketed are 6:

> Tuber magnatum Pico, better known as the White Truffle of Alba, the Acqualagna Truffle or the precious white truffle;

The truffle, regardless of quality, is made up of water for about 80%. Contains a good amount of minerals, especially potassium.

The content in terms of nutrients of the varieties of truffles listed above is very similar; what changes is the pleasure they produce for the palate and it is this aspect that determines the greater value of one variety over another.

Where to find it

Let’s talk about the origins of the truffle. The best truffles in the world come from Italy, followed by France: Piedmont, Umbria, Tuscany, Campania lead the list of the richest regions. As mentioned, truffles grow in symbiosis with specific tree species, and yet in soils that are not excessively rich in humus, but rather calcareous.

Some animal species are greedy and sensitive to the scent of truffles even when it is underground: trained dogs and pigs, which humans use, but also badgers, wild boars, mice, porcupines, roe deer and foxes. Unlike the dog, which if properly trained will not eat truffles, the pig likes it and is difficult to control.

To go for truffles it is necessary to follow courses, in order not to waste energy, money and time, and to learn the methods of research and collection. It is essential to have a dog and train it. Much easier, but extremely expensive, is to show up at a festival, a festival or a bag of truffles and hope to find something at a good price.

Words To Think On